A glimpse into the studio of one of our collaborators.

Back in 2016, Claire Hungerford, a designer at Commune, gave me a copy of one of Samiro Yunoki’s books, I became obsessed. We had been working on the Ace Kyoto project for a while at this point and his work felt like a missing piece to a big puzzle we were trying to put together. I asked our dear friend Aya Shimizu whether she had access to him and unsurprisingly she did, she was friends with the editor of the same book I had obsessed over.

I met Samiro at his home in Shibuya on January 28, 2017. Trump had just become our president and we were in shock, times seemed dark to say the least. He let us take a look around, and literally everything in his world put a smile on my face. There was such sweetness and optimism in his work, and the place was filled with so much warmth and humor, and tons of folk art from all over the world. It was all reminiscent of Alexander Girard. I mentioned this and got the first of many stories. Samiro had always been a big fan and his one and only visit to the US, back in the 70’s, was for the sole purpose of going to Santa Fe to see Girard’s incredible folk-art collection.

When we finally sat down for some tea, I asked if he’d consider creating artwork for the guestrooms at Ace. He declined. He was too busy and was 94 at the time and seemed like maybe he was slowing down a bit. But I pressed on and through Aya told him we needed him…not just for the project, but as a people. In a time filled with hopelessness and disappointment his work, filled with innocence and optimism, would be like an open window…a light. Perhaps he appreciated this, or perhaps he understood the hotel would expose his work to a younger more international audience, but eventually he said yes.

At the time I didn’t fully understand the importance of his involvement. Samiro is one of the last living Japanese folk artists who studied under Shoji Hamada, founder of the Mingei movement. Having him on the team provided us with a direct connection to Japanese craft in the deepest sense. Amazingly he not only agreed to create artwork for the guest rooms, but he also agreed to create a logo and a custom font for the hotel. In the end he also created a series of incredible original works in fabric and paper for the public areas. His creative energy and collaborative spirit was, and continues to be, a source of wonder and inspiration to us. Samiro was more than the missing piece of the puzzle, he became our Japanese folk hero, the project’s graphic godfather.

As he enters his 100th year on earth we recently got a chance to speak with him and get some pearls of wisdom:

1) What made you decide to say yes to the Ace project?

I was happy Roman had come all the way here in person to ask me to participate, and he made me feel I would be given freedom to make my own decisions without negativity or revisions.

2) What was the inspiration for the work?

I don't think it's fun to be rigid about anything. I think it's good to be able to be free, to express and create natural forms, and that's what I wanted to express for this project

3) What is your advice to young artists starting out?

Modern society is just full of information, and what we get from that information is useful. However, I think it is important to actually experience things for yourself. Rather than reacting to the overflow of images, or just putting them out there, I want you to see and feel as much as you can, and value whether or not you yourself find it interesting.

4) What is your secret for a long creative life?

Life is not all fun and games, but find something that makes you happy, or find something interesting in your daily life, even if it's something small, like receiving a letter that made you smile. Even if it's a cloudy day, if you can find even just one fun thing for yourself, your life and work will be more enjoyable. 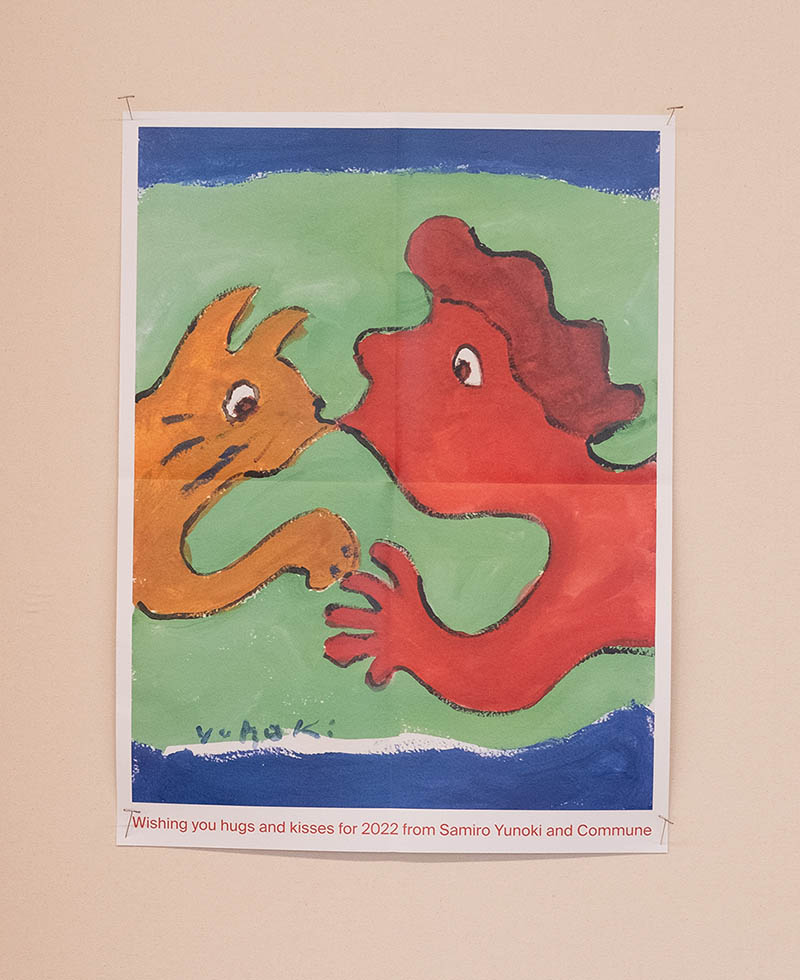 Pictured above is our 2022 New Years poster that was illustrated by Samiro. If you'd like a poster, send us a note: shop@communedesign.com and we'll send you one while supplies last.